More than a year after the COVID-19 pandemic disrupted our lives’ balance on an unprecedented scale, we are finally gaining a clearer picture of what we can expect for the future of work culture.

As offices across the world closed their doors, many workers embraced remote work for the first time ever.

For some, the learning curve was steep — forced to adapt to new technology, new modes of communication, and a new workplace culture overnight — while for others, the new emphasis on autonomy, safety, and comfort was revelatory.

There has been a growing call for the last year of upheaval to serve as a catalyst for more permanent change in the way we approach work and workspaces.

Hybrid workspaces have captured the public imagination as a perfect balance between the comfort and safety of working from home, and the valuable direction and sense of community that a traditional office environment can provide.

Here are five trends we can expect to see in hybrid workspaces over the next year:

The sudden shift to remote work challenged the long-held belief that businesses operate most efficiently from a centralized business district.

The concept of the “15 Minute Commute” embraces the idea that decentralized hybrid workspaces can not only improve the worker’s quality of life, but can also reap financial rewards for business-owners.

Moreover, the “hub-and-spoke” model now allows workers to work from satellite office branches away from the central “hub.”

This is exemplified by IWG’s demand in suburban areas, which rose by 32% in the first quarter of 2021 compared to pre-pandemic levels, with interest in rural office space increasing by 20% over the same period.

For instance, in addition to its city-center workspaces in Dublin, Regus has expanded to operate spaces in surrounding Irish suburbs like Foxrock and Santry, which are located within reach of the city center but closer to where many Dubliners live with their families.

WeWork and Industrious have also honed in on urban hubs and major regional cities for expanding their operations. Initially, this strategy was designed to target the markets with the most companies and employees, but now, city outskirts and suburbs are employees to enjoy a more satisfactory work-life balance.

As the hub-and-spoke model continues to present business-owners with the opportunity to reduce their spending on high-cost urban office space, many are embracing the cheaper alternative in city outskirts or suburbs that allows their employees to enjoy a more satisfactory work-life balance.

2. A greater role in the local community

The concept of a 15 Minute Commute takes inspiration from the French Academic Carlos Moreno’s vision of a “15 Minute City.”

The guiding philosophy of the “15 Minute City” goes beyond the interconnectedness of work and home life; it encompasses all elements of urban and suburban life — including entertainment, retail, education, and healthcare.

As the decentralization of office space continues to accelerate, it becomes inevitable that flexible workspaces and coworking spaces will become an integral part of the local community.

As well as aiding the recovery of local economies in the post-pandemic era, the integration of hybrid workspaces into more residential neighborhoods will offer many quality-of-life benefits to the remote and flexible worker.

Many workers celebrated the opportunity to discover or rediscover their own neighborhood, thanks to their new remote work lifestyle.

Local cafes, restaurants, stores, and parks became central to people’s daily lives in a way they may never have been before, fostering a newfound sense of community that proved vital to mental health during a year of disconnect and disruption. 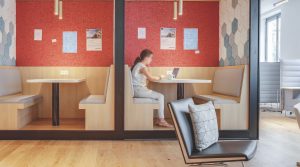 3. A greater degree of flexibility from landlords

As the shift to remote and hybrid workspaces becomes more permanent, landlords are presented with a greater impetus to engage with coworking operators following a “space-as-a-service” (SPaaS) model.

Major tech companies are leading the line in the cultural shift towards long-term remote and hybrid work, including Facebook, Apple, and Google, creating a demand that landlords and property managers are more than eager to fulfill.

Landlords are proving themselves to be open to a greater degree of flexibility than ever before, with an understanding that hybrid workspaces will require a greater degree of elasticity than traditional office spaces as the cultural response to remote work continues to develop.

This newly increased demand can already be seen in Australia, where Victory Offices — recently listed on the ASX — plan to open 14 sites over an 18-month period, with five corporate sites to be established in Sydney alone.

After an initial dip that accompanied the arrival of COVID-19, the latter stages of 2020 saw the price of coworking hot desks rise to a global monthly average of $189 by January 2021, an increase of 2.73% over the previous 12 months.

This increase was most pronounced in Central America and Oceania, while North America saw a more gradual increase from an average of $243 in January 2020 to $249 in January 2021.

5. A renewed focus on sustainability

Central to the philosophy of Carlos Moreno’s “15 Minute City” is a focus on sustainability and environmentalism.

Cutting down on commute time cuts down on carbon emissions, as occurred in 2020 when much of the world went remote for the first time. Research by the University of East Anglia, the University of Exeter, and Global Carbon Project found that global greenhouse gas emissions dropped by 2.4 billion tons in 2020, a seven percent drop from 2019.

Moreover, a wide range of spaces on a global scale — including Vios in Athens, Greece and Future Leap in Bristol, UK — are committed to offering carbon-neutral coworking, environmental technologies, and bioclimatic and biophilic design based on well-documented medical and scientific research.

In addition to the reduced carbon footprint that comes with the removal of the daily commute, IWG’s vision for a 15 Minute Commute also serves to promote healthy practices such as walking or cycling to work, helping to build a healthier community in response to the global pandemic.

Colm O’Neill is a freelance writer based in New York and Colorado.