We’re doing a Q&A series with Alex Hillman, founder of Indy Hall, to learn all about the inner workings of one of the worlds longest continuously operating coworking spaces. This is the first Q&A in the series, all about Indy Hall’s hiring process and team management, and it’s solid gold! Let’s get into it.

In general, what is your hiring process for Indy Hall?

The process relied heavily on my gut instincts. I don’t think I ever looked at a resume. There was only one time where we had more than one person in consideration at a time. I viewed the process more like finding a “super-member” who was going to help our community thrive and help make sure the space kept running smoothly.

We used this more casual process for around 7 generations of community leaders that we hired… and it worked very well!

This year, our hiring process evolved a lot, and our current teammates, as well as our members, have played a huge role in making these changes.

We’ve been doing a lot of work to be proactive about diversity and inclusion, and when it was time to hire our next teammate we realized that our hiring process was unintentionally exclusionary. If you didn’t already know somebody at Indy Hall, there was no way to “apply.” That meant a LOT of people were being excluded from the incredible benefits of working as a part of our team.

So this year, we made some important changes:

For the first time, we clearly documented the objectives of this hybrid role in a way that left it open to be moulded to the person, but less ambiguous and confusing. 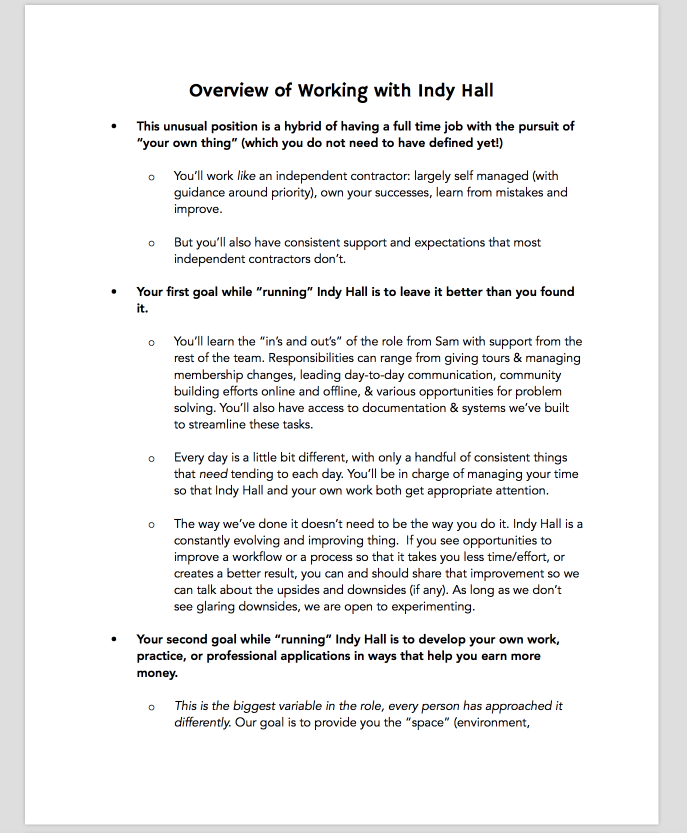 What professional qualities and personality traits do you look for in a candidate, especially that other coworking space founders should look for?

The two most important qualities I look for are curiosity, and self/context awareness.

I think it’s a common misconception that we should hire pure extroverts. In this business, it’s a lot more important that you can listen, than that you can sell.

What we do need are people who genuinely care about the people they meet every day, even if they need to work to manage their energy when it comes to the ‘social’ side of the job.

Being the front-facing person in a coworking space means that you’re going to be repeating yourself. A lot. So I want someone who is able to be genuinely curious about the person they’re talking to regardless of how many times you’ve given a tour – if you are doing a good job, each tour is going to be that person’s first time hearing most of what you have to say.

And with existing members, you need to be able to stay curious for the long run, even if their “thing” isn’t your “thing.”

Emotional intelligence is a tough thing to screen for, but for me, the biggest clues are how the person perceives other people and situations. Can they see other peoples’ differences and try to understand them? Can they recognize different contexts, and understand the nuances between them?

One of my favorite hacks for finding people with a lot of these skills is to hire people who’ve taken an improv class (or even better, who have performed improv). Improv skills are basically listening as a team sport, and improv training is great for helping develop these kinds of listening skills.

How do you deliver tough feedback?

I try to view myself as more of a coach than a boss, so first I try to take a step back from the problem and to understand and reverse engineer what the person is trying to get better at. Are they stuck somewhere? Do they feel unsupported? Maybe there’s a certain kind of incentive that I know motivates them.

With that understanding, I’ll try to get to the root problem as quickly as possible. I don’t assume I know what’s wrong, but instead, I ask. And I don’t take the first answer at face value. Sometimes we need to dig a little deeper to find out what’s actually holding them back.

Then we set a small, achievable goal that they can run with. The more control they have over the outcome, and the faster they can feel a win, the better.

Small, incremental changes in the right direction. Tighten up feedback loops as necessary.

And the earlier these conversations can happen, the better.

Almost all of my biggest mistakes in leading a team has been feeling that something was off for a while and not saying anything, or simply not checking in often enough.

What does an Indy Hall team meeting look like? How do you keep meetings productive, but still fun?

We honestly don’t have a lot of meetings. We do have a Monday morning check-in that’s important for catching up on everybody’s weekends and making sure that there aren’t any big surprises ahead for the week. This meeting is just as much about seeing how everybody is feeling about the week (excited vs anxious, prepared vs overwhelmed) as it is about talking through the calendar and goals for the week.

We also have a 30-day outlook once a month to put our entire upcoming calendar (including personal commitments) on a whiteboard calendar at once to get a sense of what’s coming up. This lets us spot especially chaotic weeks or upcoming lulls, as well as turn some of our more ephemeral plans into concrete ones by giving them dates.

We also occasionally have a working session where there’s a new tool, or process, or problem that we are trying to solve together. We try to time-box these to an hour, max because there’s no way anything useful gets done in a meeting that lasts >1 hour.

Speaking of, these are the things that make meetings not fun:

If you see any of these things happening in your meetings, no amount of “fun” is going to fix them.

How do you review your team’s performance? What has worked and what hasn’t?

There are two things I really care about:

The first one is pretty straightforward. You’re either doing it, or you’re not. If you’re not, I make it my job to figure out why.

The second one is harder because it’s so different for everybody. There isn’t a right or a wrong pace, so long as there is progress being made. Ideally, we’re making course corrections along the way.

The second part is also the most rewarding for my teammates, for me, and frankly for the Indy Hall community. When our members see our team as individuals, as independent professionals with creative skills, it’s hard NOT to get excited and gain even more respect for the coworking team who supports them every day.

Have you ever had to let somebody go? If so, what lessons did you take away from that? If not, how would you do it?

The first time I fired someone I threw up. Twice.

And I couldn’t stand that guy. Ugh, he sucked so much.

So you can imagine that it’s even worse if you like the person as a person, but it isn’t working out.

The exact approach is going to vary a lot based on the person and the situation. Even in the worst situations, I’ve tried to reinforce that I’m willing to help them in any way I can, including feedback if they have specific questions.

What I try to avoid is giving feedback that isn’t specifically asked for.

Nobody likes to be fired, and since the person is already in a vulnerable position it’s not helpful for anyone to start telling them what they did wrong or what they could improve until they ask for it.

The toughest lesson of all is that you can’t want something for someone else.

The best thing you can do as an employer is to try to understand what your teammates really want and help them get there.

If their goals aren’t aligned with your goals, no amount of incentives is going to magically make them want the same things as you. Even if you see potential in someone, they have to be the ones to realize it.

Alex is best known for starting Philadelphia's Indy Hall coworking community in 2006, years before coworking became a 'thing'! Indy Hall and Alex's work have been featured in national and international publications. He's a well respected business advisor & instructor for other aspiring community builders and coworking catalysts. He writes at dangerouslyawesome.com and tweets as @alexhillman.