TL;DR It’s not possible. Stop striving for perfection. Don’t be trendy. Be useful.

As coworking gets more media attention, it’s easy for new coworking operators to get pulled into that jetstream of hyperbole. Articles about the newest treadmill desk, purification system and programmable lighting have led many a new owner astray from what’s most important. The people.

I feel lucky that I started my coworking space Cohere way back in 2009 when no media outlet even cared about us. We were blissfully left to our own devices and were allowed the freedom to pursue what people rather than amenities.

By my standards, Cohere is very successful. It is profitable, I love my work, I work about 25 hours/week and I feel I make a positive difference in the lives of others.

I want to take you on a retrospective of Cohere’s physical space from early 2009 right up to the present when we shut down for a week to do a major remodel of our space. If there’s one takeaway I want you to get from this article, it’s that coworking spaces like Cohere have always been perfectly IMPERFECT despite what the media says. We’re still imperfect even after I engineered the single greatest construction project to occur over four days to give us darn near everything on the members’ wish lists. Let’s go!

2009: I hear about coworking and ask the incubator where I was volunteering to let us practice coworking every Tuesday in the lobby where I was “Assistant to the Receptionist.” The only amenity we had was wifi. We sat at folding tables and chairs and I even had to cart in those cardboard boxes of coffee for us. After FIVE weeks we broke their internet and ran out of chairs. Coworking isn’t about the space. If it was, Cohere never would have taken off. 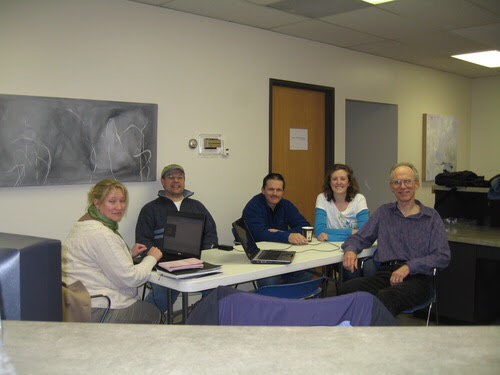 Week three of practice coworking in a donated lobby.

2010: I began the hunt for a more permanent space and we landed in a beautiful historic building in our downtown area seen below. Look how wonderfully perfect the space looks. What you can’t tell from the picture above is that wasps lived in the handrail so members got stung on the regular when they arrived to cowork. The floor was so slanted that we would roll away from our desks and it was really hard to stay close to our laptops. Also not pictured: our super weird landlord who would shower after yoga and come out of the bathroom in his towel, and there was a very old swamp cooler that made our space smell like an old fish tank every August. Good times. 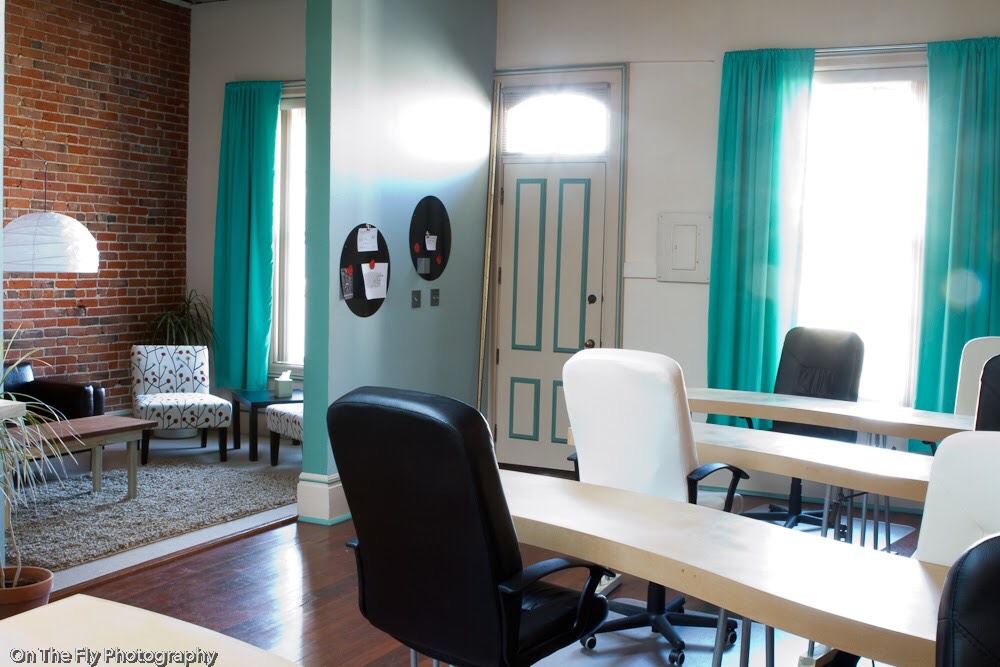 We grew to 30 members in this first space and despite the challenges, we grew to love each other and I think our challenges bound us together. We were determined to persevere as a group no matter what weird variable came our way.

2011-12: The community moved itself a few blocks away to a slightly larger space, pictured below. I was 11 months pregnant so the community literally did all the heavy lifting. This space was a hard sell for the members. They were sceptical of it since it had many different levels and rooms but there was a deck! Bonus. 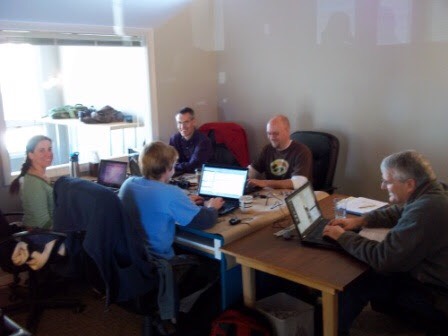 This clump of five desks plus another five in an adjacent room held us over for four whole years while Cohere struggled after I had my daughter. I had postpartum depression and couldn’t get my shit together for almost two years. Noteable: those desks were terrible. I got them for a song at a university surplus store but they were an ergonomic nightmare. These two years were probably the peak of our imperfection, yet somehow Cohere remained profitable. There was no ONE person at the helm. The only thing that kept Cohere going was the members.

When I finally returned, Cohere was in a state. We were stagnate, not growing and kind of worn out. Since my full return four years ago I’ve been overhauling our physical space and making our member processes and onboarding like a well-oiled machine. It’s paid off.

In the past four years, we’ve expanded inside the building five different times by adding offices as they became vacant and slowly waiting out the leases of other tenants. We’ve grown, though painfully slowly, from 1,000 sqft to now 3,500 sqft spread over five levels in the building. 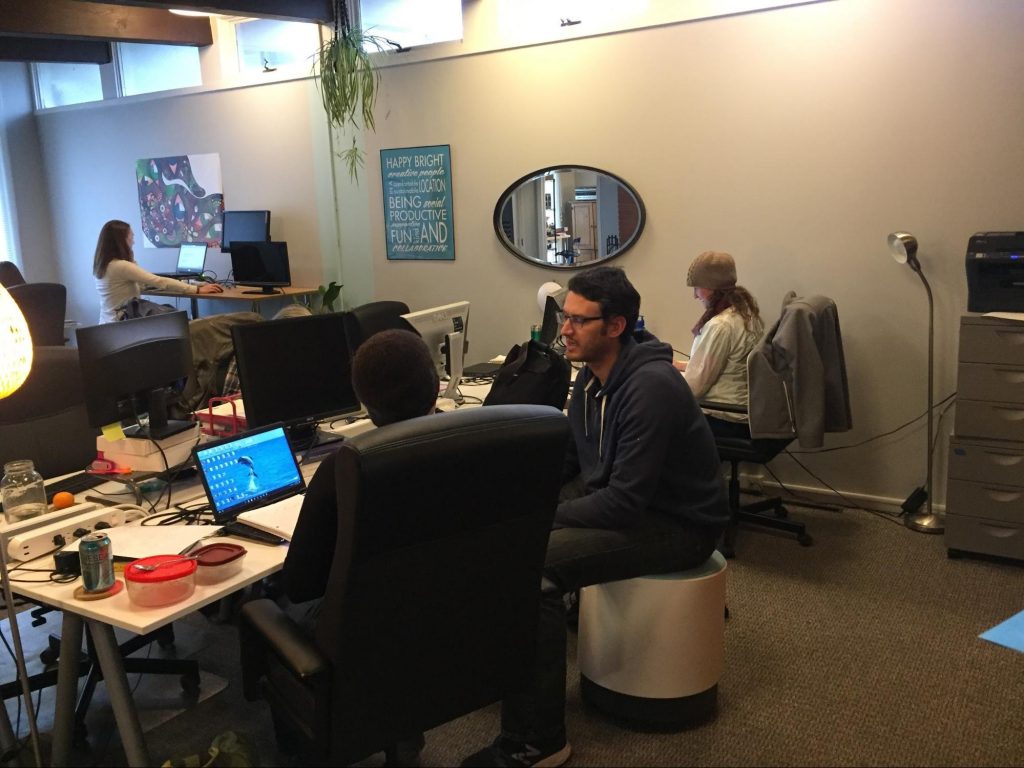 2016: We remove the private office that is blocking most of our natural light from the west and rearrange ourselves in the coworking area. It made a huge difference and allowed us to add more desks and more members!

For much of 2016–2017 we are on a wait-list to join our community. The first and most painful thing a coworking owner can experience is an empty space. The second most painful thing is a wait-list. To have to turn people away who really need some friends is heart-wrenching. I began to look for ways to add more bodies without adding square footage.

Late 2017: a private office goes vacant and we decide to turn it into a quiet workspace, thus netting us four new flex desks. The writers at Cohere LOVE the quiet space called the Zen Den and use it a lot.

However, we’re still on a wait-list. I start hounding the landlord about the guy who occupies 600 sqft of space in the back of the building BY HIMSELF. His lease is up in May and I pounce on the opportunity.

While we await his departure I reconnect with my favorite general contractor and tell him that a bunch of walls are going away and I need him the first week of May 2018 and all the work has to be done in that one week, no exceptions. I send him this rendering of what we’re trying to accomplish. 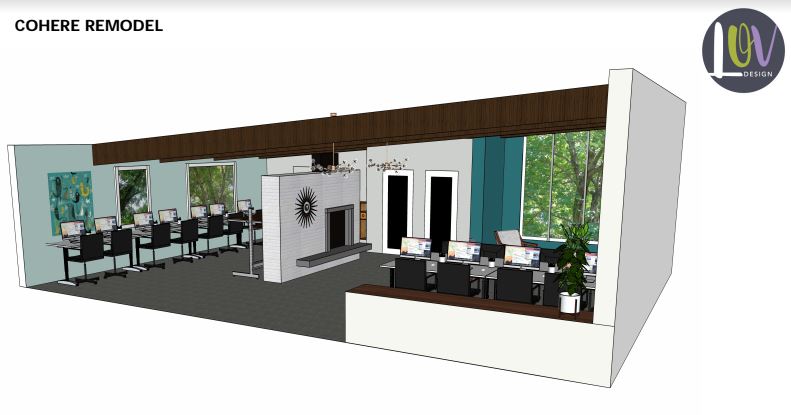 In the space of 10 days, we relocated two private office members from our upstairs coworking area to the new back section of the building and bring in the demo team, electricians, painters and a surprise plumber.

As remodels go, it was easy. A good general contractor is worth his weight in on-time sub-contractors. Aside from the giant pipe, we found in a wall and some less than seamless wiring scares, we did well and were on-time. 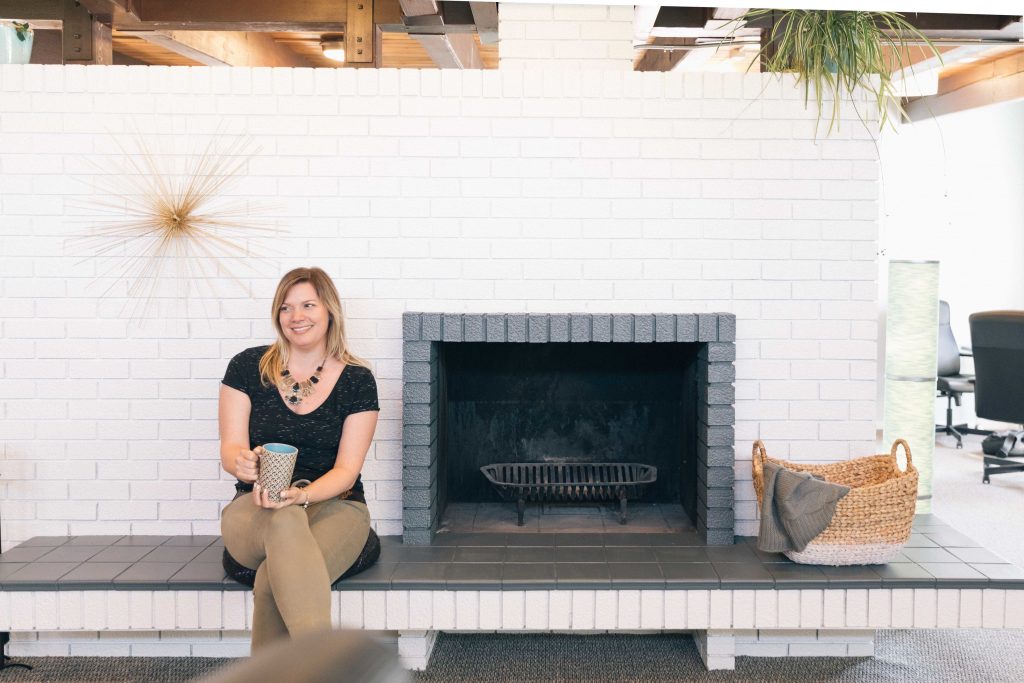 Cohere finally has the best physical space we’ve ever had but we’re still imperfect. Our small community is spread over five floors. This is hard. I can’t see everyone who is in the space at any given time at a glance. It takes 20 minutes to walk the building looking for everyone. Our phone rooms are too small. Too hot. We get ants in the basement sometimes. We are located 30 paces from the railroad. Things are hard but the people are good and tolerant of the continuous improvements.

The takeaway here is that you’re never going to find the perfect space, the perfect floor plan, the perfect furniture. Even if you find a building and you tweak it for a decade, it’ll never be just right.

Coworking members are just like kids. The moment you think you’ve got them figured out, they change on you again. Their work styles change their phone use changes. They all want standing desks on Monday then they’re all sitting again on Tuesday. But the one thing that hasn’t changed in all these years is that they want to be together and it doesn’t matter what desk, what water, or what light you give them. They’ll grow with each other.

Angel Kwiatkowski is the founder of Cohere, the first and largest community-managed shared office space in Fort Collins, Colorado. Since its opening in 2010, Cohere has helped countless local freelancers and remote employees integrate in their community to achieve professional and personal success. The co-author of the first-ever ebooks about coworking, Angel was the token female panelist at the first-ever Global Coworking Unconference Conference (GCUC), and continues to offer low-budget and bootstrapped coworking spaces practical tips and guides via DIY Coworking. Check out her new workbook, the Ultimate Coworking Launch Sequence.