We all remember seeing the first images of Facebook or Google’s offices in Silicon Valley around 2004. While avant-garde features like hammocks and indoor putting greens initially shocked the corporate world, there was something undeniably appealing about the offices’ wide-open spaces.

At the time, creativity and collaboration were valued above all else, which led business managers to consider the designs of their offices more closely. It became a major trend, especially among tech companies, for open-plan workspaces to take precedence — such as Nike’s NYC headquarters (complete with an indoor basketball court) or Airbnb’s “urban campus” offices in Dublin.

Business owners grew curious: could an open-style work environment encourage the sharing of ideas? Would workers be more productive if they weren’t confined to a cubicle?

Through the years, companies across the globe transitioned to open-style office plans, aligning with the new workplace trend that experts claimed was the best and most effective setup. In 2017, Forbes confirmed that some 70% of offices in the U.S. followed an open-plan layout. 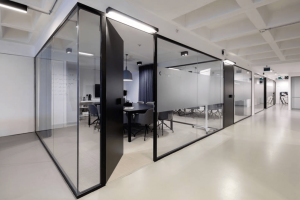 Open layouts: a thing of the past?

In spite of this rapid spread, open offices were already being scrutinized for the negative effects on workers’ focus. One landmark study by the Harvard Business Review found that face-to-face interactions fell by 70% in offices that switched to open-style. The truth about open offices, time revealed, was that their unintended consequences outweighed their aesthetic appeal.

Of course, all of this was only intensified by the arrival of COVID-19. Thanks to the uncertainties that still surround viral transmission in dense, indoor spaces, the pandemic has practically obliterated the open-style office.

Now, workplaces that were initially designed to be open and airy are being transformed back into divided spaces with cubicles and private offices.

In particular, many coworking spaces are rethinking what they offer, turning away from hot-desk seating and expansive, open floor plans to accommodate rising demand for private workspaces. In May, data from Coworker showed that private offices accounted for 51% of all leads, while 17.99% were for hot desks (or open seating) by comparison.

These numbers underscore the reality that office spaces are confronting: employees don’t want to work in open-style offices where the risk for viral transmission is higher. Instead, coworking operators have recognized the need for private desk spaces and offices so people can feel safe and secure while working.

Take Tribes Inspiring Workplaces, for example. In April, Tribes announced a new post-pandemic concept for its coworking spaces in Belgium, Germany, and the Netherlands. Each of the operator’s 23 European offices were transformed into “Blue Zone Offices,” which prioritize health, safety, and privacy among workers.

While Tribes’ offices prior to COVID-19 were defined by the amount of open, flexible workspaces and creative designs, the operator shifted their focus to limited-access workspaces and strict route guidance. With demand rising for private spaces, coworking operators like Tribes will likely continue to implement things like desk dividers and new workstations that resemble cubicles. 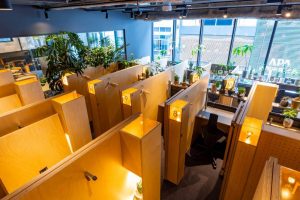 The rise of private workspaces

Even Starbucks is getting on board with enclosed spaces. In Tokyo, for instance, a new location recently opened that offers 17 solo spaces available at ¥300/15 minutes (~$2.83/15 minutes), which are styled as private phone booths.

In order to thrive in a post-pandemic work environment, coworking spaces and other flexible workspaces will need to provide options for professionals that are more confined and sheltered by nature. This way, remote workers can not only feel protected from COVID-19, but they will also have a space to go to during the day that’s often more functional and efficient than their at-home setup.

This will be especially important as the return to work gets underway, since the global remote work experiment that we all experienced earlier this year has led many to seek — and even long for — workspace outside of one’s home. Research by JLL revealed that a combination of “in-office work and remote work are complementary when it comes to achieving human performance.”

In the study, 58% of newly established remote workers missed the office for a variety of reasons. In the Americas, for instance, respondents most commonly missed their daily routines; in EMEA, they missed human interaction; and in Asia, they missed a professional environment that enabled focus.

What this ultimately confirms is that leveraging the best of both in-office work and remote work will become key to productivity and employee satisfaction in a post-pandemic environment. Since each way of working comes with its own value, enterprises will need to strike the right balance that allows workers to be and feel safe. Inevitably, this will result in the return of the cubicle and a permanent departure from open-style offices and coworking spaces.

CEO and founder of Coworker.