The rental sector in the United Kingdom is growing, mostly in response to the fact that the country is experiencing a housing shortage.

Properties that are being built to accommodate the shortage have to be targeted specifically toward the market where they’ll sell most efficiently and serve the greatest number of people. Right now, that means building properties specifically to be rented out.

Build-to-rent (BTR) properties are a fairly new development in the United Kingdom. The properties, as the name suggests, are designed specifically for tenants who will be renting the space instead of opting for home ownership.

BTR developers hope to create miniature communities through shared experiences and shared spaces like lounges, private dining rooms, and gyms, giving the feel of a hotel where people stay long-term. At some projects, BTR developers even offer coworking spaces alongside the rental units, granting tenants a place to work outside of their homes.

A residential brand called Moda Living, which has primarily focused on build-to-rent properties, is now entering the single-family-rental sector with Casa by Moda.

With 1,000 units in the pipeline and a target of delivering a further 4,000 by 2025, the team behind Casa by Moda is hoping to set a new benchmark for renting across the UK, Bisnow reports.

The company will serve 15,000 residents in the next three years alone, with a $1 billion gross development value. The brand says it wants to build modern rental homes with one, two, three, and four bedroom options, all of which will put an emphasis on well-being, technology, and community.

Casa by Moda neighborhoods in Leeds, Edinburgh, and Birmingham are set to open in 2022, all of which will emphasize quality, customer service, and community. Thus far, the developer has properties in Manchester, Leeds, York, Bradford, Nottingham, Liverpool, and Birmingham.

The properties will have coworking spaces where people can work “from home” in a different spot from their actual houses.

The rental properties will also have access to lounges and private dining rooms available for special occasions. Like other apartment complexes, they’ll also offer on-site gyms – with one Casa by Moda project planning for a 200-meter running track on top of a roof. 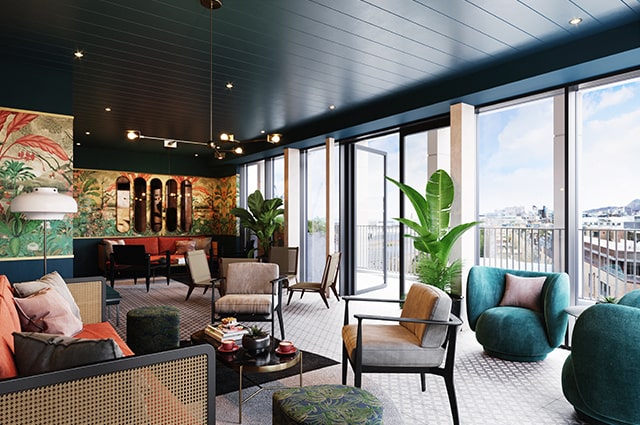 Located outside of city centers, the month-by-month cost to stay in single-family rental is often more affordable than other rental properties. Many young renters strive for the hustle and bustle of city life where there’s less land available, leading the costs of urban residential buildings to skyrocket.

With single-family rentals, however, tenants can opt for a slightly longer commute in exchange for cost-savings – and peace and quiet.

There are other benefits to the single-family rental housing market, too. Many single-family rentals will be run by property management companies who know what they’re doing, and – like any other large business – whose success is dependent on creating a good name for themselves. That’s why Moda Living places such a heavy emphasis on customer service – it’s part of the brand, which will ultimately drive interest in their properties.

Of the 27.8 million homes in the United Kingdom, nearly a sixth of them – 4.44 million – are privately rented. That ratio is likely to change in the coming years as the market shifts considerably to favor rental homes.

The UK’s government hopes to build 300,000 new homes a year to keep up with a growing population and meet the demand for new homes amidst the current shortage. Experts estimate about 45,000 of those could be built as rental homes or single-family rentals if the current trend continues.