Landlords and property owners can no longer afford to ignore the opportunity presented by flexible offices and coworking spaces.

After the onset of COVID-19 and rapid growth of remote work, office landlords in virtually every city in the world became saddled with vacant space. With 30% of global office inventory projected to become flexible by 2030, landlords are now seeing the value of flex space for their portfolios.

As workers begin to return to offices, “flex space is being buoyed by businesses deploying less capital into real estate” and by employees who now expect more choice over where they work.

“The issue is that office landlords want more flex space in their portfolio, but the operators aren’t willing to take on new leases,” says Ben Munn, managing director of flex space at JLL.

As a result, many landlords are considering partnerships with coworking and flexible office operators to minimize the severe strain on office real estate they have faced over the past 12 months.

The new business model is becoming known as management agreements, allowing flex office operators and landlords to share revenue. In turn, this offers a higher potential in both occupancy and income in times of an economic slowdown.

Coworking companies have also felt sharp losses as a consequence of the pandemic, especially in urban-centric office buildings, The Wall Street Journal reports. Some say COVID-19 is accelerating the end of office real estate’s lease-and-sublet model as a whole.

With the broader office market under threat, a number of coworking companies are adopting management agreements to remain asset-light.

Global coworking operator Mindspace provides one example of this emerging trend, signing five management agreements in the last two years. In cities such as Philadelphia and Berlin, as well as other cities in Israel, Europe, and the United States, Mindspace has forged ahead by partnering with property owners.

“COVID-19 has accelerated processes globally and has made the flex model the ideal choice for the present,” says Mindspace’s Co-founder Yotam Elroy. “On the one hand most companies now express an interest in flexible solutions for shorter periods of time starting from one month – compared to standard contracts lasting 5-10 years, and on the other hand property owners are shifting to management agreements and the introduction of flex office spaces in their buildings.”

The future of the coworking model

The subleasing model was already losing popularity before the pandemic, thanks in part to WeWork pulling the plug on its ill-fated IPO. With WeWork turning to the partnership model for many of its future locations, coworking companies of all sizes are abandoning sublease-based operations.

Related  What Are Virtual Offices and Who Are They For?

According to Bisnow, Knotel presents an intriguing microcosm of how the flexible office industry might move forward. Knotel, which has always resisted being labeled as a coworking operator, leases small office blocks of space to one company.

Knotel tenants – ranging from budding startups to large corporate companies including Amazon, Microsoft, DoorDash, and Oracle – typically sign flexible lease terms for about two or three years, CoStar reports. This strategy is ideal for fast-growing companies, which don’t often want to stay locked into a set amount of space for an extended period of time. 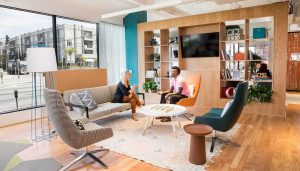 Other major coworking players like IWG, which operates a range of flex office brands including Regus, SPACES, and BizDojo, are also partnering with landlords to create smaller workspaces in suburban locations.

By envisioning a hub-and-spoke future – whereby larger locations remain in urban centers and smaller locations open up in metropolitan suburbs – IWG is making plans to open numerous locations under its new SPACES DESKS brand. These smaller locations, which will allow local property developers to quickly fill hard-hit retail vacancies, will be particularly convenient to workers in suburban neighborhoods.

“The flexspace market is about to explode,” says Thomas Sinclair, IWG’s Group CIO and Global Head of Network Development.

As businesses are forced to consider new ways of working, IWG told Loopnet it expects to see companies worldwide spread out their workforces, with neighborhood coworking spaces growing in demand.

“Rather than being on the fringes of the commercial real estate market, [flexible workspaces are]absolutely front and center now,” says Sinclair. “It’s front page news, which is a very exciting place to be.”

For a sector whose future was deeply worrying a few months ago, the new trend in management agreements has potential to rapidly increase the amount of flex offices in the market.

With JLL predicting 30% of all office space to be flexible in some form by 2030, management agreements are set to create mutually-beneficial partnerships for both landlords and coworking operators alike.